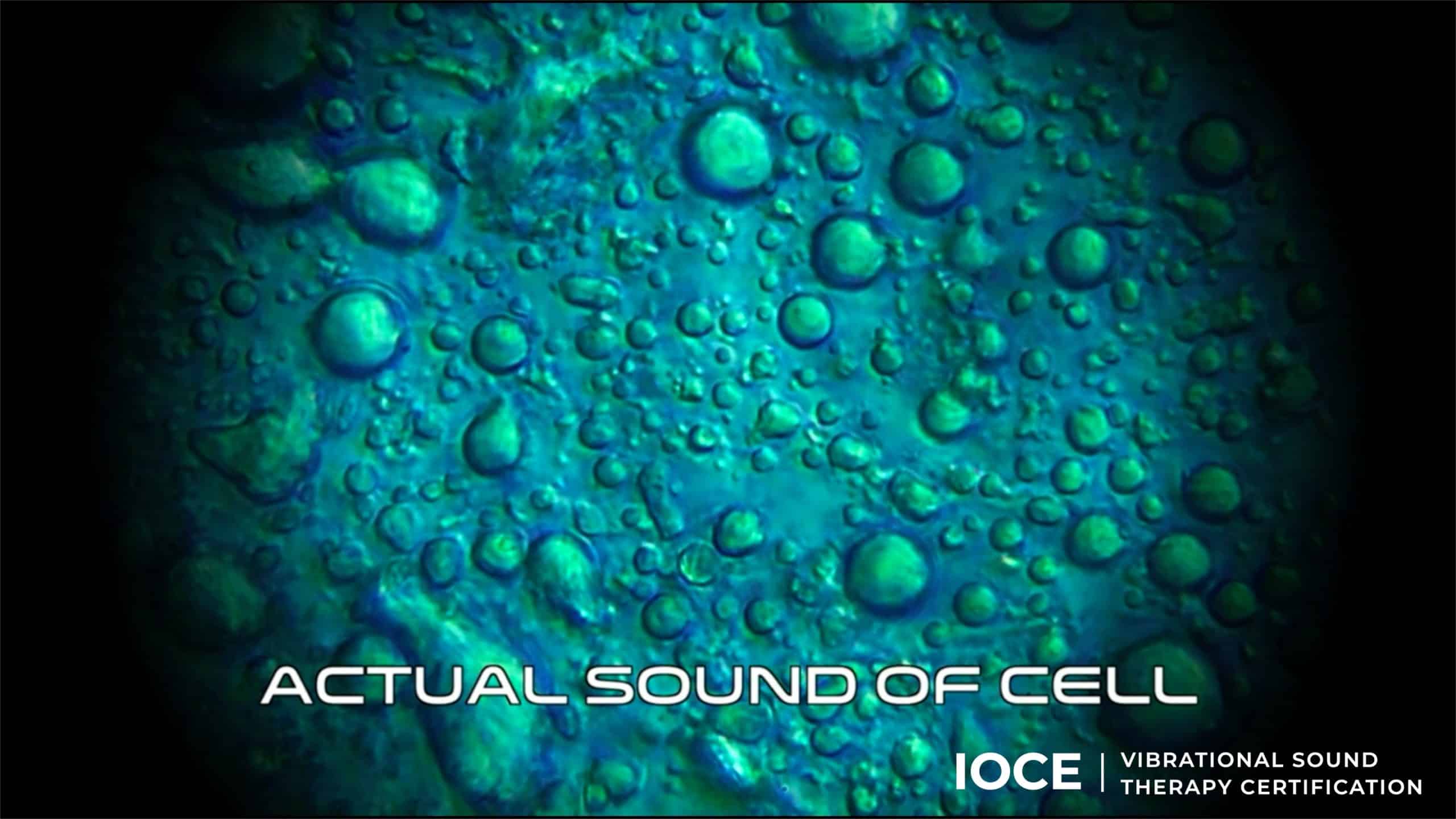 For those practicing sound therapy the discovery that cells produce sound is no surprise.

Gimzewski and his colleague, Andrew Pelling, published their findings in 2004 in a prestigious scientific journal. The conducted experiments on simple barkers Yeats cells and what they found was fascinating. The cell wall of yeast oscillates at a fixed frequency which is temperature-dependent. The average frequency is about 1000 vibrations per second. Human ears have the ability to hear sounds with frequency in the range of 20 to 20,000 Hz. The volume of the sound produced by this nano-motion is too low to be heard by humans but its frequency falls within the audible range, which means it can be amplified to be audible. Gimzewski used commercially available software to convert this rhythmic cellular motion to an audible hum.

The origin of the cellular oscillation seems to be the metabolic activity of the cell.

Inside a cell are various motor molecules, like dynein, actin, etc. They form the framework of the cell — the cytoskeleton — and are also used for transport inside the cell. It appears the sound detected by AFM is produced by the working of these molecular motors, just like moving parts in a car motor produce noise. Others have hinted towards ribosomes as a possible source. Ribosomes are cellular organelles involved in protein synthesis and are present in large numbers inside a cell. Gimzewski, however, disagrees with the ribosomes hypothesis and favors molecular motors as a source of the cellular noise.

Other factors that alter the metabolic machinery of the cell influences the sound produced.  For example the vibration stops when a metabolic inhibitor acts upon the yeast cells, and its pitch increases when the cells are treated with alcohol. Yeast cells with certain genetic mutations, too, produce a discernibly different sound.

Using nanotechnology techniques, especially atomic force microscopy, the scope of work has been extended to mammalian cells including human cells — both healthy ones and cancer cells.

The work done by Gimzewski led to the formation of a new research field called Sonocytology — the study of sounds generated by cells. Finding relevant and practical applications for this newly found science has been the next logical step.

A compelling aspect of sonocytology has been its potential use for the diagnosis of diseases. Michael Teitell was one of the first persons to explore this. Teitell, a pathologist at UCLA, thought of developing a database of acoustic signals from a variety of cancer cells which would then be used as a reference for comparing different cancers. Work done by other researchers has shown that diseased cells, especially cancerous ones, have different mechanical and elastic properties compared to normal cells. This means the sound signal generated by these cells would be different than the one produced by normal cells.

The idea is that nano-oscillations produced by diseased cells will have a different acoustic pattern than that produced by healthy cells.

Thus, listening to cells will enable physicians to detect diseases before they manifest clinically. In this case, the atomic force microscope (AFM) will, in effect, play the role of a nano stethoscope.

For the pioneers of this research field, the discovery of the phenomenon that cells generate rhythmic sound which can be heard by humans is an achievement in itself, even if the field doesn’t advance further. However, they are optimistic about finding broader use cases for it. The idea behind the use of sonocytology in clinical practice, especially oncology, is compelling although its practical utilization is yet to materialize.

The science of sonocytology is still young and according to researchers like Teitell would require many more years of research to be of clinical relevance. Its potential, however, seems promising. Our current methods of detecting cancer require the use of radiation imaging, histochemical stains, and molecular patterns. This means thousands of cancerous cells must be present in the sea of normal, healthy cells in order for them to be identifiable.

With sonocytology, a single cell might be enough to diagnose cancer and even tell its prognosis. This could make the early detection of cancer possible. Compared to molecular methods which study a specific, limited aspect of a cell, listening to the sound of a cell will arguably provide a more wholesome picture of its overall health. The hope is that in the future, with sonocytology, early detection of cancer might become a reality.

Like every new field of research, sonocytology has its fair share of doubters, right from the get-go. Herman Gaub, a German physicist, pointed out that there could be more than one source of these sounds, and the possibility exists that they might arise from locations other than the cell membrane. To this, Gimzewski’s colleague, Pelling, agreed and hinted at more refined experiments. After a year of experimentation, they were confident that the source of the noise was indeed the cell itself. Some doubted the possibility that the technique could be applied to mammalian cells given their softer membranes compared to yeast. This has however been achieved successfully. The vibrations produced by human cells and especially cancer cells are, predictably, lower-pitched than that of yeast cells. There is a concern that the lower amplitude of sonic signals produced by human cells, especially cancer cells, might not be strong enough to be detectable and if detected, it may not be clear to yield meaningful information.

The researchers hope, however, that the use of more sensitive and smaller probes in the AFM would address this concern.

In the two decades since its discovery, sonocytology has advanced at a slower pace than some of its pioneers, like Teitell, might have hoped. With time, the hype has died down too. It is yet to carve a role for itself in the field of medicine.

With advancements in nanotechnology and cytology, and our changing perspective regarding the diagnosis of human diseases, especially cancer, one could hope that, in the years to come, listening to the sound of cells would be one of our weapons in the perpetual fight against deadly diseases.