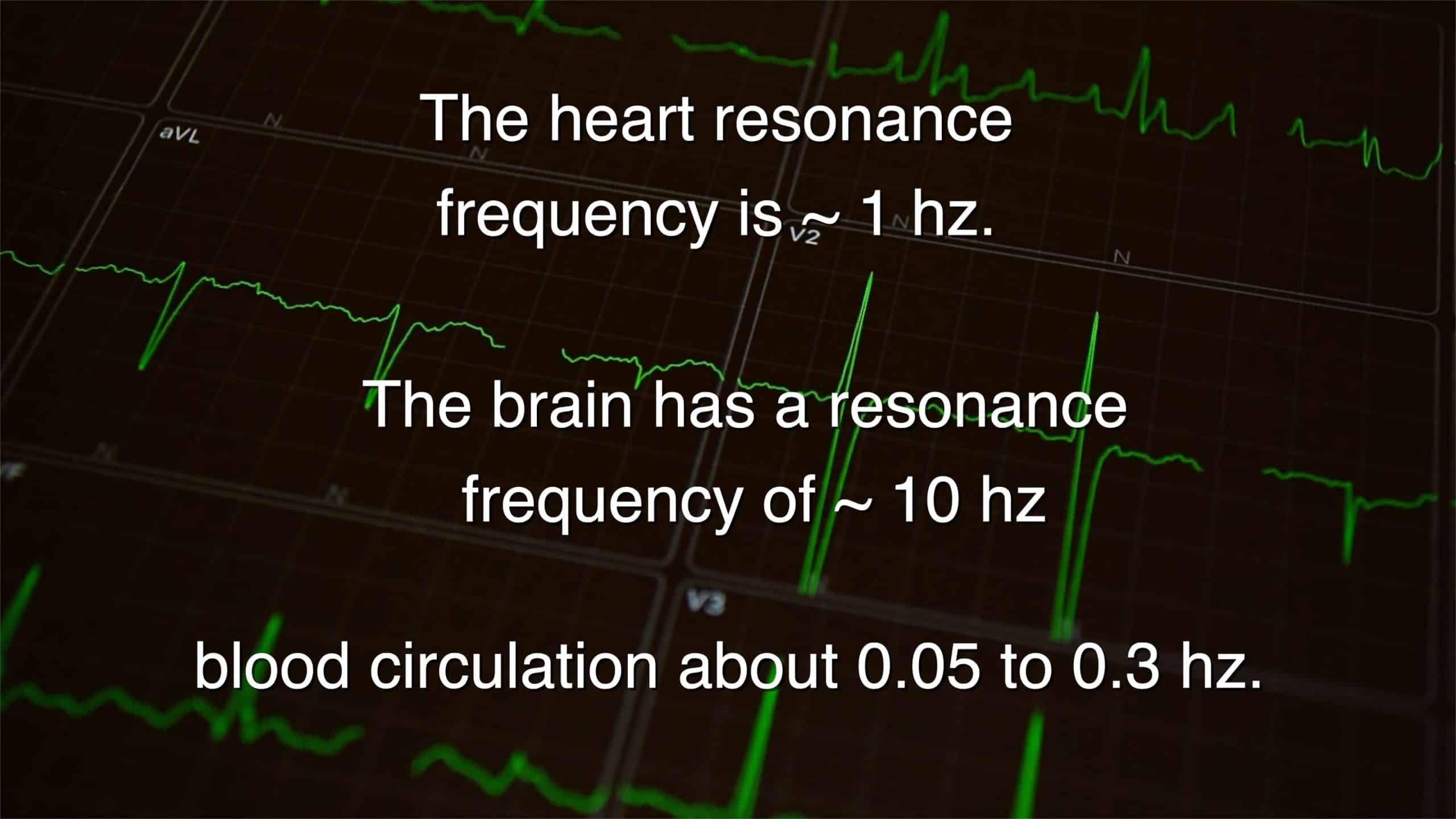 Humans vocalize — they produce sound with their vocal cords. In addition, they produce sonic signals through their muscles and other organs whose frequency is lower than that audible by humans.

Raise your elbows and make a fist. Now place your thumbs in the openings of your ears to close the ear canals. Do you feel a rumbling sound like the rolling of thunder in the distance? If not, clench your fists tighter and listen carefully. This low hum is the sound produced by the contraction of your muscles. Your body produces sound waves with a frequency lower than the detection limit of our ears, that is, 20 Hz. They are known as infrasonic vibrations. Frequencies around this range are normally not audible but the vibration energy can be detected and felt.

The origin of the infrasonic vibrations in humans has been attributed to physiological processes like heartbeats, blood flow, and rhythmic movements of respiration, among others. Though the field as a whole has been under-explored, the infrasonic vibrations generated by muscles are studied in relatively more detail. Beginning with the work of G. Oster and J. S. Jaffe in the 1950s, experiments using transistorized stethoscope have shown the effects of various factors on the sonic signals produced by muscles. Increasing the load on a set of muscles, the elbow or thigh muscles, for instance, lead to a higher intensity sound, as recorded by the microphone. Reducing blood supply to the muscles, by inflating a cuff over the elbow, had no significant effect on the tonal qualities of the sound, suggesting that the generation of the sonic signals is an intrinsic property of skeletal muscles, irrespective of its activity and blood supply.

The phenomenon that muscles produced infrasonic waves was first demonstrated by F. M Grimaldi in 1665. Later, Herroun and Yeo noted that electrical stimulation of muscles produces similar sound waves as those generated by voluntary movement.

The resonance frequencies generated by other individual organ systems have also been determined.

Muscle is not the only human organ that generates infrasonic vibrations. Human bodies are complex three-dimensional structures with millions of physically active microunits .

The amplitude of the vibratory waves is normally between 1 to 5 microns, though significant variations exist depending upon the state of body activity. The sonic waves produced by muscles have, predictably, a higher frequency than those produced by the rest of the body, reaching up to 30 Hz, barely touching the audible frequency range. The sound pressure, however, is too low — 6 to 7 db — to be audible without amplifying devices.

The heart resonates at a frequency close to 1 Hz, while blood circulation generates a resonance frequency less than that. As a result of all its neuronal activity and changes in action potential, resonance activity of the human brain is estimated to be around 10 Hz.

Scientists have been successful in transforming brain oscillations into audible sound. A special instrument, colloquially known as the brain stethoscope, consists of a band with a built-in speaker that converts the brain waves, otherwise recorded on an EEG strip, into sound waves. A monotonous noisy note can alert to the possible development of a seizure. This can be particularly helpful in the detection of what is known as silent seizures, which are devoid of the usual violent activity associated with fits.

Infrasonic signals are a well-known method of communication in the animal kingdom.

The functional implications of infrasonic vibrations in humans are less clear compared to other species in the animal world. Infrasonic signals are a well-known method of communication among a number of mammal and bird species. Pigeons, for example, can detect low-frequency sound waves and it is proposed that sensing these signals help them in homing, orientation, and migration. Pigeons and Guinea Fowl may also use these infrasonic signals to sense distant thunderstorms and subsequent rain. Among mammals, elephants and whales are known to produce and detect infrasonic signals. In the case of elephants, these low-frequency sound signals, commonly called rumble vocalization, are used over long distances for coordinating movement and spacing within a social group, to communicate with affiliated individuals, and to trigger defensive behavior. Whales use infrasonic signals to communicate over long distances, up to hundreds of miles.

Acoustic field around the body.

Taken as a whole, the infrasonic vibrations can be thought of as forming an acoustic field around the body. This is not the only energy field emitted by our bodies. It has been known that due to the plethora of biochemical reactions inside our bodies at the cellular level, glucose metabolism being a prime example, a field of electromagnetic energy also surrounds our bodies. This makes the functioning of our bodies amenable to alteration by the effects of external resonance sources, whether infrasonic or electromagnetic, by interfering with our inherent resonance patterns.

Infrasound in the environment

Sources of infrasound in the environment are myriad, both of man-made and natural origins. Natural sources include the wind, infrasonic waves generated in marine storms called microbaroms, geomagnetic activity, and small-scale seismic phenomenon. Transient, naturally occurring activities like the passage of meteors and auroral activity in the north can also lead to the generation of infrasonic signals. Cultural or man-made altercations include diesel engines, modern duct systems for heating and ventilation inside buildings, airplanes, large ships, and wind turbines. In addition, several incidents of persistent low-frequency rumblings have been reported in various cities across the world, which are commonly attributed to local industrial machinery though a clear source of the infrasound is usually not apparent.

Whatever the source, the effects of the interference of external infrasonic signals with those inherent to the human body can lead to a wide range of medical phenomena. Infrasonic waves have the remarkable ability to travel for longer distances as their absorption in the air is much less than audible sound. In addition to distance, the sound pressure the waves carry is another determinant of the biological effects of infrasound on humans.

The observed effects of infrasonic signals include a feeling of sickness, nausea, behavior and mood changes, malaise, fatigue, and a medical syndrome called vibroacoustic disease. Some reports are anecdotal like the observation by ancient Greeks that people living in areas with persistent winds have specific medical symptoms or the findings that the blowing of wind in wet and cold weather, presumably due to a higher infrasound pressure, led to an increased incidence of sickness in residents of a high-rise Denmark hospital. In other cases, there is significant experimental evidence to support the adverse effects of infrasound on human health. It was reported by Bruel and Olesen, for example, that some people exposed to infrasound signals with a frequency of about 12 Hz and pressure of 58–110 dB felt ill within a short while of exposure. Others have noticed that university students sitting for a significant amount of time in lecture halls with large duct systems for ventilation had uneasy feelings of closeness and change in emotional behavior, which reverted when the motors were turned off.

Vibroacoustic disease is a multisystem disorder that results from prolonged exposure to low-frequency noise — frequency of 500 Hz or lower. Initial symptoms include mood and behavior changes, which may progress to overt depression or aggressive behavior. Hearing loss, neurovascular disorders, and cardiac problems are part of the disease process.

Not everything about external infrasonic vibrations is bad, however. There are therapeutic applications of low-frequency sound signals in the management of muscular disorders and chronic pain.

The generation, applications, and science of sound has been extensively studied. The infrasonic signals, the inaudible sound, on the other hand, is less so. Moreover, the full implications of the interaction of our infrasonic vibrations with those already present in the environment are not yet explored.

The study of infrasonic vibrations provides an area of research that may hold important and unknown information about the workings of our bodies. Using sound therapy to balance the body’s system, a sound therapist intention is to give an extra layer of protection from the prolonged exposure to low-frequency noise from our environment .

The growth of the sound therapy industry